On Sunday 20th October we will be honouring insirational teachers at the 2019 Pearson National Teaching Awards UK Ceremony.  Thirteen Gold Award winners will be announced at the ceremony, which marks its 21st year of celebrating excellence in education.

The ceremony will take place at the Roundhouse in Camden, and will be broadcast on BBC2 on Saturday 26 October as “Britain’s Classroom Heroes”, starring hosts Sean Fletcher, a regular sports presenter on Good Morning Britain and Countryfile presenter, and Tina Daheley, well known as a newsreader on the Radio 2 Breakfast Show and a regular presenter on Newsbeat.

On Sunday 21st October we celebrated 20 years of transformational teaching as the Pearson Teaching Awards UK Ceremony 2018 took place at The Brewery, London. It was an opportunity to celebrate all our 2018 Silver Award winners, announce our 2018 Gold winners, and highlight the life-changing work done every day by the whole of the teaching profession.

The ceremony was broadcast as Britain’s Classroom Heroes, on BBC2. If you missed it you can watch below. You can also see photos from the evening here. You can find information on 2019 entries here.

Our hosts for the evening were journalist and presenter of Wild Escapes and Countryfile, Anita Rani and journalist, radio and TV presenter Sean Fletcher, who helped tell the stories of some inspirational teachers as we honoured the whole profession.

On Sunday 22nd October 2017, 56 Pearson Teaching Awards Silver winners and their guests attended a glittering awards ceremony at The East Wintergarden, London, where the winners of the prestigious Gold Plato Awards were revealed. The ceremony, hosted by BBC Breakfast presenter Naga Munchetty with Countryfile’s Sean Fletcher, was broadcast on BBC TWO as Britain’s Classroom Heroes to honour exceptional teaching professionals from across the UK. 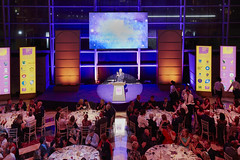 Get a feel for the evening by looking through our pictures of the evening. You can also see read more about the 2017 Gold Plato winners, and see the offical photos of the winners.

Watch the show here (tissues at the ready,there are some tear-jerker moments!):

Archive:
Watch the 2016 broadcast of the UK Pearson Teaching Awards ceremony held at the London Guildhall and broadcast on October 30th 2 16. The host was Hugh Dennis.

Below are clips from the 2016 Awards to get a glimpse of  what it’s like to be a Teaching Award Gold Winner.

Teacher of the Year in a Primary School 2016:

The Award for Excellence in Special Needs Education 2016

The Award for FE Lecturer of the Year 2016

The Award for Lifetime Achievement 2016

You can also watch highlights from Awards Ceremonies past: